September 24, 2018: RFA is Wrong on the Data -- There is No Ethanol Demand Destruction

A recent Real Clear Energy piece highlighting the fallacy of ethanol “demand destruction” certainly hit a nerve with the Renewable Fuels Association (RFA), prompting them to issue a detailed, point-by-point  response.  Unfortunately, they missed an important part of the Real Clear Energy piece—the part about inappropriate interpretations from specially selected data points.  RFA’s reply included more data cherry picking that did not change the central fact that the editorial highlighted: Even with falling RIN prices and small refiner exemptions (SREs), there is still NO evidence of ethanol demand destruction.

While we’re sure AFPM would love to take credit for the exceptional piece of work, the Real Clear Energy piece was authored by AFPM’s retired Chief Industry Analyst.  As RFA noted, she did work for the U.S. Energy Information Administration (EIA) … for over a decade, in fact … where her focus was fuel supply data analysis … so despite RFA’s condescending comments about her (or anyone who declines to “drink the ethanol” for that matter), she certainly would know better than anyone at RFA how to read and interpret EIA data.

First, the ethanol data.  Picking a few data points is never a good way to demonstrate demand  trends, “destruction” or otherwise.  The blend rate graph below demonstrates that the EIA Monthly Energy Review (MER) blend rate has been fluctuating quite a bit in recent months – up as well as down – compared to the more stable period from 2012 through 2016.  But the 2018 ups and downs on net reflect little if any trend change.  Biofuel friendly academic Scott Irwin also confirmed this fact in a recent Farmdoc Daily blog, where he concluded there is no convincing evidence for ethanol demand destruction. 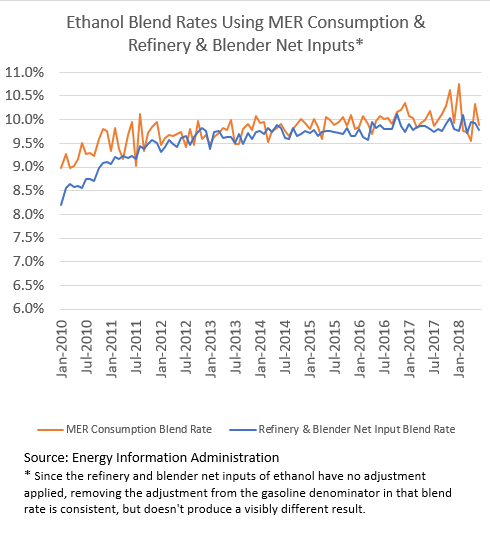 For those trying to understand the ethanol data, those large MER consumption blend rate swings (orange line) are a good illustration of the risks of focusing on a few data points.  The fluctuations also are why the EIA Petroleum Supply Monthly (PSM) refinery and blender net input data[i] and its blend rate (blue line) can be valuable to observe.  If your eyes are glazing over at this point, just skip to the next subsection below.  But for the other data geeks, read on.

RFA recognized the important role of the adjustment factor in estimating ethanol blending that is not covered in the EIA refinery and terminal blender surveys.  The R&B net input data is collected from refineries and terminals blending ethanol into gasoline.  However, the survey is not sent to everyone that blends.  For example, to minimize burden on smaller companies, the survey does not collect from small bulk terminals that blend ethanol.  The adjustment (which is a calculation that forces a balance) theoretically picks up this extra ethanol and is the reason why the MER consumption (refinery and blender net inputs plus the adjustment) is represented as total U.S. ethanol consumption.

Unfortunately, the adjustment also picks up errors and timing differences from all ethanol collection series in the supply-disposition balance, including  ethanol production, imports, and exports.  Most of the time, timing and data errors are not large, but timing and errors contribute to monthly fluctuations.

The 2018 adjustments have resulted in significant fluctuations, both up and down, indicating there are likely data collection issues resulting in larger month-to-month swings (again, in both directions) rather than market actions.  Such issues occur in data series from time to time, which is why EIA is transparent in displaying adjustments rather than making such changes behind the scenes.  That transparency helps analysts avoid misinterpretation of the published data.  EIA does follow up to find and correct data problems, but in the meantime, most analysts know when to use the data cautiously, watching trends and not focusing on individual data points.  These facts also note why it is instructive to look at the MER and R&B net input data together while looking for trends.

The Facts Continue to Show there is No Demand Destruction, because Ethanol is Economic without a Mandate

Now to basic business logic.  The use of the ethanol data for a demand destruction argument assumes the waiver requests were for small refiners to reduce their use of ethanol.  However, as previously noted, small refiners do not control biofuel blending for the vast majority of the fuel they produce.  Additionally, ethanol is economic to blend into E10 today.  Even biofuel advocates have recognized this fact.  Infrastructure is now in place to deliver and sell E10 blends in most areas, and parties throughout the supply chain have invested in and changed equipment to take advantage of ethanol’s octane value.  The fuel supply system  would be hard pressed to change back to an E0 world.  E10 is here to stay.

A better understanding of the 2018 data highlights why, despite SREs and falling RINs, and with more than half a year of data, EIA is still predicting ethanol holding its own in the U.S.  The latest STEO, released September 11, projects a 2018 blend rate of 10.08 percent.  The same document shows the actual blend rate in 2017 was 10.07 percent.  If significant demand destruction were occurring, we would not expect EIA to be projecting steady and slightly increased ethanol use in the U.S.

[i] The prior Real Clear Energy article referred to refinery and blender ethanol net inputs as the “PSM data”, and total ethanol consumption published in EIA’s Monthly Energy Review as “MER data”.