June 17, 2020: The Price Data the US Government Ignores When Implementing the RFS

While ceaseless political maneuvering from rent-seeking ethanol interests directed at the White House and EPA keeps RFS policy constantly in flux, another arm of the U.S. Government maintains a very clear idea about what the RFS does to our nation’s biofuel markets and the underlying problems that politics creates.

The U.S. EIA regularly collects a range of eye-opening data about what kind of fuel is produced and consumed in our country—and where it comes from when it’s not made in the USA. A close read of that data underscores a number of truths about biofuels dynamics that its proponents prefer swept under the carpet.

Yes, you read that right: one part of the government (the EIA) is acknowledging that the market distorting actions of another part of government (the EPA carrying on a failed Congressional policy) is THE reason that biodiesel demand in the U.S. exists at all.

Why does that matter? It matters a whole lot because, if the market itself is not calling the shots, all sorts of distortions and contortions have to occur to meet this artificial demand.  In fact, biodiesel this year has cost anywhere between $1.50 and $1.80 per gallon MORE than petroleum diesel.  This premium hurts the truckers we rely on to deliver products to our houses and grocery stores, just as people are looking for ways to save money while stuck at home thanks to the pandemic.

Ironically, if the current biodiesel premium persists, it will hurt none other than the agriculture industry itself, as diesel fuel expenditures for equipment and product delivery consistently represent one of their largest costs.

EPA itself has received evidence on how the higher cost of biodiesel itself hits consumers, and agriculture economist Scott Irwin has addressed the biodiesel premium on multiple occasions, including on a 2018 National Public Radio story entitled, appropriately enough, “Turning Soybeans Into Diesel Fuel Is Costing Us Billions.”

“This is an easy one, economically. Biodiesel is very expensive, relative to petroleum diesel,” says Scott Irwin, an economist at the University of Illinois, who follows biofuel markets closely. He calculates that the extra cost for biodiesel comes to about $1.80 per gallon right now, meaning that the biofuel law is costing Americans about $5.4 billion a year.

Not only is biodiesel expensive: we don’t produce enough of it here in the U.S.  That means the United States must rely on foreign imports to cover a requirement that was established to promote American energy independence.  So much for Congressional intent!  Back to that EIA report:

U.S. imports of biomass-based diesel, which include biodiesel and renewable diesel, grew 26% in 2019 to more than 27,000 barrels per day (b/d), reversing three years of decline.

That’s right: just when you thought America’s ability to produce enormous amounts of oil and gas had allowed us to ratchet down our reliance on imports, the RFS (billed as a way to achieve energy independence) has made sure that U.S. imports of foreign fuel remain elevated regardless of the signals our capitalist economic model might send. 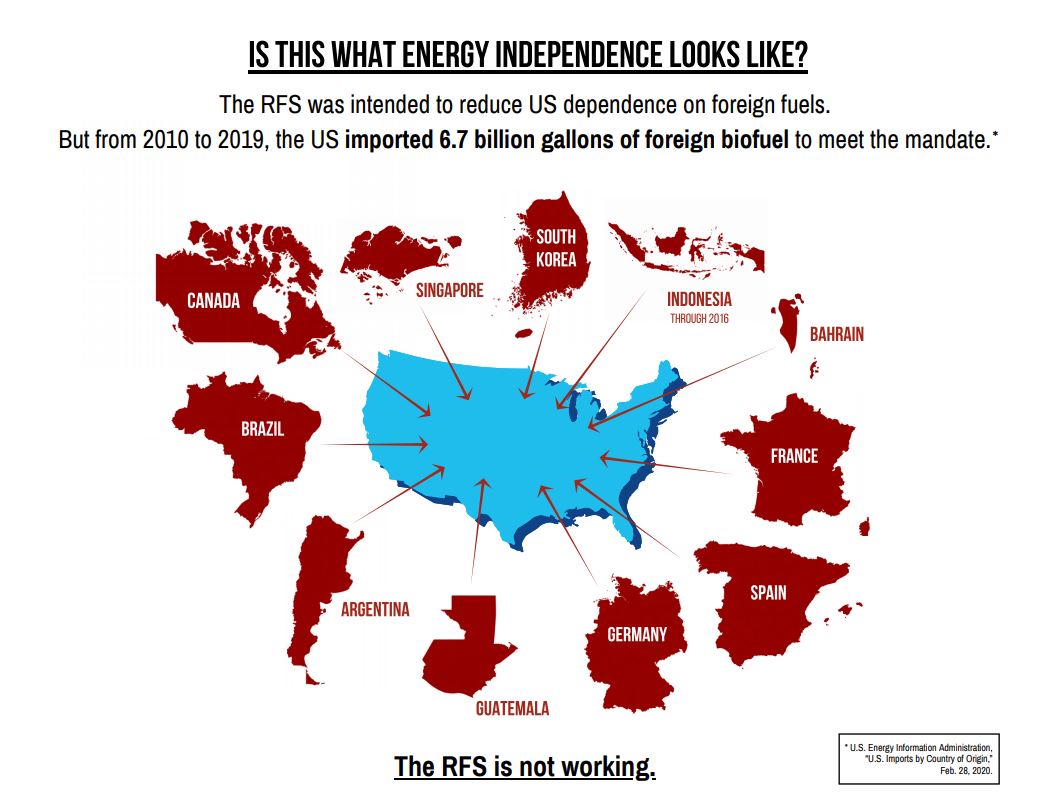 The trend is continuing this year: EPA data notes that nearly 24 percent of the bio- or renewable diesel manufactured to date for RFS compliance comes from foreign suppliers.

Why else does that matter? We’ve been scrambling here at home as well to meet those lofty RFS biofuels goals—and that has implications for land use. So much so, in fact, that some environmental groups have turned their backs on the policy. (Remember: the other big selling point of the RFS, beyond the energy independence that it does nothing to achieve, was its assumed environmental benefits.)

The National Wildlife Federation, for one, has become so dismayed at ethanol’s outsized, subsidy-driven impact on the environment that the group recently came out in favor of issuing waivers to states that can’t economically meet their RFS obligations. Their letter explains why:

In short, the corn ethanol mandate has led to the loss of important wildlife habitat, particularly in regions critical for monarch butterflies, ducks and other ground-nesting birds, and many other species—threatening outdoor recreation opportunities as well as the economy. The mandate has also resulted in deteriorated water quality and harmful algal blooms in important surface waters as a result of increased farm runoff. Increasing mandated blending levels increases the potential for further land conversion, presenting a marked threat to the battle against global climate change, with its consequent catastrophic effects on human health and the environment. Higher blends of ethanol necessitated by unrealistic RVOs diminish public health.

So much for the founding environmental arguments for the RFS.

What else does EIA know that EPA should be taking into account? A June 8, 2020 EIA report shows ethanol use rising and falling with gasoline demand—not the price of RINs. Why then the eternal push by biofuels interests to press market forces to escalate RINs costs? Well, a lot of folks who blend fuels make nice extra profits from high RINs prices—and some of those same folks exert an outsized amount of sway over biofuels policy in Washington, DC.

The June 8th EIA report also notes limited demand for ethanol blends above E10, even before the onset of the COVID pandemic, which led to the same inventory build-ups that the ethanol industry has a documented history of making (see this Reuters article, among others).

Bottom line: If you chart ethanol production and overlay it with RINs prices over time, it verifies that RIN prices do not impact ethanol use, one way or the other.