May 17: You Pay, They Profit: How The RFS Costs Americans $30 Billion Each Year 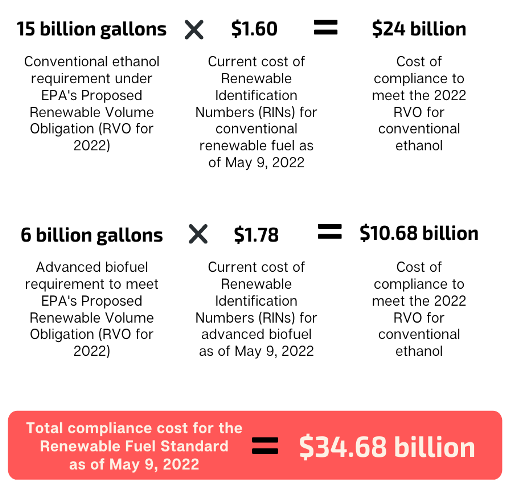 The Renewable Fuel Standard (RFS) was established by Congress to enhance America's energy independence and security, by requiring a specific volume of renewable fuel – primarily ethanol – to be blended in the nation’s transportation fuel supply each year. It’s a law with laudable intent, but a flawed regulatory system that’s costing American consumers $30 billion each year – almost 30 cents per gallon at every fill-up.

When ethanol is blended into gasoline, a tradeable credit called a “Renewable Identification Number” – or RIN – is created, and refiners have to collect the requisite amount of these credits to demonstrate compliance with the law. Refining is the only industry in the U.S. that the federal government requires to purchase credits to prove an ingredient has been blended into a product.

The problem lies in the fact that this blending of ethanol cannot occur at the refinery, because ethanol’s chemical properties won’t allow it to be shipped via pipeline. Ethanol is “hygroscopic,” meaning that it can take and hold moisture from its surroundings. Because limiting the amount of water in fuel is critical, ethanol blending can only be blended with gasoline downstream from the refinery, at wholesale distribution terminals, as it’s loaded into a tanker truck for delivery to local gas stations.

Since independent refiners own few, if any, of these terminals where blending occurs, they must purchase RINs from “Big Oil” companies with large blending operations, from large retail chains which also blend renewables but have no RFS obligation, or even from third party speculators who have no connection to the fuel supply chain but who buy RINs with the intention of trading them for profit.

The problems with this structure begin when the Environmental Protection Agency’s (EPA’s) mandates that more ethanol be blended into the fuel supply than our engines and infrastructure can physically handle. Only a quarter of all cars on the road can run on fuel with more than 10 percent ethanol, and only 2,000 of the 130,000 gasoline stations (about 1.5 percent) in the U.S. even offer fuel with more than 10 percent ethanol.

As a result, when EPA mandates more ethanol than the fuel supply can handle, not enough ethanol RINs can be generated to meet the requirement. The Big Oil Blenders and large convenience store chains and other third parties, including Wall Street speculators, take advantage of this government created scarcity to drive up RIN prices to their benefit. They can make the situation even worse due to the fact that the RIN market is completely unregulated, enhancing their ability to make a killing at the expense of their competitors and consumers.

Unfortunately, there is no safety valve or a pot of stable, fixed-price RINs available on the market. Independent refiners who must buy RINs are thus held captive to whatever price these sellers charge for RINs.

When the RFS first became law, it was expected that RINs would trade for pennies apiece. On May 9, 2022, RINs were trading at $1.60 per gallon – a 1,200 percent increase since January 2020. RIN prices are driving up operational costs, essentially becoming a hidden tax on U.S. independent refiners and American consumers alike, adding 20 to 30 cents on every gallon of gasoline.

Independent refiners have repeatedly warned EPA regulators that thousands of jobs and our nation’s fuel supply are on the line, as they continue to spend more on RINs than on all other operating expenses combined, which was proven when a Philadelphia refiner filed for bankruptcy, blaming the cost of RINs as a contributing factor. This untenable system unnecessarily raises consumer fuel costs, makes it impossible to plan future investments and could put some refineries at risk.

Meanwhile, RINs have become a major money maker for “Big Oil Blenders” and large convenience store chains that sell them. In September 2021, Casey's General Stores – one of the top three convenience store chains in the U.S. and a non-obligated party under the RFS – reported a strong first quarter to its investors. According to Casey’s own earnings highlights, profits were up as the company, “sold $18.7 million in renewable fuel credits (RINs) in the first quarter, an increase of $15.3 million from the same quarter in the prior year.”

“Thanks to the highest RIN values ever, the company realized an additional $7 million to $8 million for the sales,” the Oil Price Information Service (OPIS) reported at the time.

More recently, Murphy USA announced that RINs added 11 cents per gallon of profit to their first quarter operations in 2022.

Fix the RFS: How the Biden administration can reform the federal biofuel mandate to lower costs for consumers

Figure 1 demonstrates how, at current RIN values, the RFS is costing Americans more than $30 billion each year. Lowering the cost of RINs is one of the few policy measures that would have an immediate, beneficial impact on retail prices for gasoline consumers.

Clearly, fixing the dysfunctional RFS mandate and its broken RIN system would help to lower costs for consumers at the pump. As Energy Policy Research Foundation President Lucian Pugliaresi testified in front of the U.S. Senate Environment and Public Works Committee earlier this year, “the RFS program is raising gasoline prices by approximately 30 cents a gallon.”

The Fueling American Jobs Coalition is calling on President Biden, EPA, and Congress to make urgently needed structural changes that will support the original objectives of the RFS – preserving America’s energy independence and security – without putting independent refiners out of business, eliminating thousands of high-quality refinery jobs, and causing higher consumer gas prices at the pump.