Recent EIA data and academic research show that ethanol consumption remains robust and on track to outpace last year’s numbers, even despite small refiner exemptions (SREs) and falling RIN prices. So much for the long-held claims of ethanol demand destruction … we hope … but surely there must be a bogeyman out there somewhere, right?

In fact, a new one has emerged just in time. The ethanol demand destruction  myth is now facing competition from a fresh face: The claim that SREs and falling RINs are causing demand destruction to biodiesel. Brace yourself for another round of house-on-fire hysteria.

Yet a close examination of both the facts and history of the biodiesel mandate warns us against crying wolf once again. The stubborn fact remains that domestic biodiesel production is up compared to last year. And if in fact the product is in some way falling short of its potential, the more fair-minded out there would note that U.S. trade policy and a lack of clarity over the federal biodiesel tax credit would be lead factors in creating market uncertainty.

What’s going on, then? The massive tariffs levied against our nation’s biggest biodiesel import suppliers – Argentina and Indonesia – have boosted the fortunes of domestic biodiesel producers at the expense of these foreign suppliers. Ironically enough, they’re making it all the harder to meet RFS mandate levels. Perennial uncertainty around retroactive extension of tax incentives has also hindered biodiesel consumption growth.

History of the Biodiesel Mandate

Over the last few years of the program, actual domestic biodiesel production has never been enough to meet the actual biodiesel mandate. Why? Biodiesel is a lot more expensive than petroleum diesel and needs significant artificial support to be economical. Additionally, domestic biodiesel producers have historically been less economically competitive compared to foreign suppliers. As a result, for the past several years, the RFS has essentially become a foreign biodiesel import mandate.

This reality is in part why the biodiesel industry advocated for massive tariffs on the primary foreign supplier of biodiesel to the U.S.; tariffs that the administration ended up instituting. Yet, as often happens with tariff protection, domestic producers prove unable to make up the gap. The result has been increased domestic biodiesel production (discussed below) matched with a continued inability for that domestic production to meet lofty domestic targets, resulting in a decline in the consumption of biodiesel relative to last year.

Domestic Biodiesel Production on the Rise

As tariff proponents had hoped, domestic biodiesel production has risen every single month this year compared to last year. In total, through the first 10 months of the year, domestic biodiesel producers have made over 242 million more gallons (generating over 362 million more RINs) than they did over the same period last year, according to EPA data. Production is the most relevant metric for biodiesel in relation to the RFS, because unlike conventional ethanol, biodiesel producers can separate and sell RINs attached to their fuel, instead of having to separate RINs at the point of blending (as with ethanol RINs). 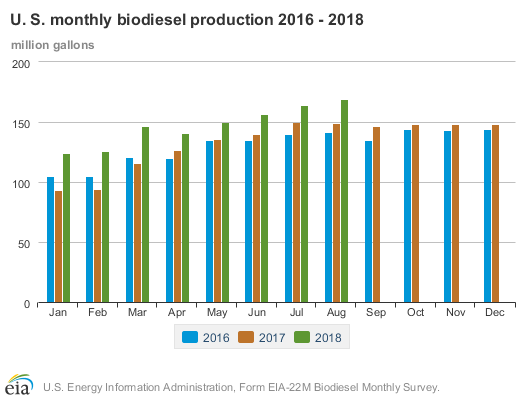 Rather than focus on the production data that demonstrates clear growth in the industry, biofuel advocates are citing a drop in aggregate biodiesel RIN generation to prove up their cries of hardship (never mind that this is an industry already boosted by an artificial consumption mandate and protected with import tariffs). While EPA data does show a drop in overall biodiesel-related RIN generation, the drop amounts to roughly 52.8 million RINs, the equivalent of about 35 million gallons of biodiesel—a drop in the bucket compared to its 3 billion gallon consumption mandate. But even more to the point, the data demonstrates the relative decline is associated only with foreign imports, which also garner RINs upon entering the U.S., but which have been limited due to tariffs … put in place to protect the domestic biodiesel industry! In other words, the drop in RIN generation attributable solely to decreasing imports achieves exactly the goal domestic biodiesel producers sought in advancing tariffs.

Even with the tariffs, the U.S. is still a net importer of biodiesel, so the increased domestic production is not simply being used to feed foreign demand. The reason is attributable to the fact that even with the significant growth domestic producers are experiencing compared to last year, they still cannot economically meet the RFS mandated levels. Biodiesel consumption is down 65 million gallons year to date, but imports are down by over 244 million gallons. The Energy Information Administration (EIA) indicates domestic biodiesel producers are only on track to produce 1.9 billion gallons, well short of the actual and de facto 2.8 billion biodiesel requirement.[1]

Finally, while biofuel advocates feverishly point to fluctuations in month-to-month data, the comparisons seldom tell the whole story. Biodiesel consumption is historically characterized by massive swings both up and down. And yet, the overall consumption trend remains upwards.

The real challenge facing the biodiesel sector is the uncertainty over the fate of the one dollar per gallon biofuel tax credit. Because Congress has only authorized the credit retroactively, it is never fully priced into the market, which perceives the yearly ritual as a looming threat while reauthorization debates proceed. This lack of certainty has a direct market impact due to the fact that biodiesel is significantly more expensive than petroleum-based diesel.

Despite falling RINs and SREs, domestic biodiesel production is up and its consumption has been gradually increasing since January 2018. Any difference in consumption from last year is solely attributable to tariffs that have helped prevent the RFS from becoming the massive de facto foreign biodiesel mandate that it has been the last few years. The reason domestic biodiesel still cannot produce enough fuel to meet the mandate numbers is that it is more expensive than petroleum diesel and cannot take full advantage of federal tax incentives. Both of these issues explain changes in overall biodiesel consumption, rather than anything related to the RFS.