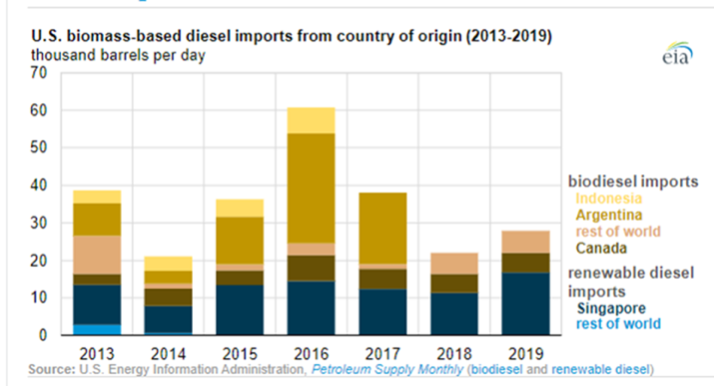 The energy landscape of the United States has changed drastically since Congress established the most recent version of the Renewable Fuel Standard (RFS) in 2007. In the last few years alone, our nation’s independent refiners have been forced to endure fuel demand destruction from the global pandemic, a massive cyber-attack on our nation’s critical infrastructure, and supply chain disruptions resulting from Russia’s war on Ukraine.

These unprecedented disruptions, coupled with the volatile, sky-high prices of the RFS program’s compliance credits – called Renewable Identification Numbers (RINs) – were the primary factors behind 10 refineries closing or announcing closure in the last three years alone. Since 2019, the U.S. has lost nearly 1.4 million barrels per day of refining capacity due to these shutdowns.

For our nation’s remaining independent refiners, it’s never been more important to reset the RFS and get this program back on track. U.S. Environmental Protection Agency (EPA) Administrator Michael Regan has repeatedly promised that the Biden administration will “reset the RFS,” and bolster America’s energy independence.

To reset the RFS in a way that preserves the program’s original intention without eroding our nation’s domestic refining capacity, it is critical that the Biden administration lowers the ethanol requirement to contain the volatile costs of RINs – providing independent refiners with longer-term certainty and predictability and bringing down consumer fuel costs. Specifically:

1. EPA must ensure Renewable Volume Obligations (RVOs) are not set above the blendwall, which represents the upper limit of feasible ethanol use with projected transportation fuel demand.

Under the RFS, each year, EPA is supposed to establish RVOs, which mandate the biofuel blending volumes refineries must meet to comply with the program.  The agency is supposed to determine these volumes based on projected fuel supply and other anticipated economic conditions.  In recent years, EPA has proposed ethanol RVOs that are above the amount of ethanol that can be safely blended with the amount of gasoline that is projected to be used given engine and infrastructure limitations.

This scenario creates an unachievable ethanol requirement. As a result, instead of meeting the RFS ethanol requirement through obtaining ethanol RINs, refiners must over-comply with the more costly mandate for biofuel in the diesel supply. As can be seen in this chart from the Energy Information Administration (EIA), this necessitates importing hundreds and millions of gallons of foreign bio and renewable diesel each year.

Given this situation, when “advanced biofuel” (bio and renewable diesel) RINs become the marginal RIN needed for compliance, they bring the price of ethanol RINs up to unnecessarily high levels.  Practically speaking, when EPA’s RVOs are decoupled from economic reality, RIN markets tighten, creating unsustainable financial pressure for independent refiners. When EPA’s proposal for 2022 was first floated in the press, RIN prices rocketed from 75 cents to $1.05 apiece over the course of a week, with wild fluctuations fueled by market speculation—showcasing the volatility of the broken, RIN-based compliance system.

Independent experts have noted these sky-high RIN prices are adding 20 to 30 cents per gallon at the pump.

2. The Biden administration should contain the volatile costs of RINs for independent refiners, enabling them to better plan for the future.

Since ethanol’s physical properties prevent it from being shipped via pipelines, most independent refineries that do not have retail operations and sell their product into the interstate pipeline system lack the necessary infrastructure and resources to blend the biofuel into the fuel supply on-site.

In the early days of the RFS, RINs traded for pennies apiece. In October 2022, RINs were trading at $1.60 per gallon. Independent refineries have reported spending more on RINs than all operational costs combined. As previously mentioned, high RIN prices are also adding as much as 30 cents on every gallon of gasoline.

Adding insult to injury, the data above shows that high RIN prices do not contribute to higher amounts of ethanol in our nation’s fuel supply. Instead, RIN prices are cost-prohibitive; they prevent independent refiners from being able to plan and invest for the future. They have also contributed to the closure of 10 refineries since 2019.

Some beneficiaries of the broken RIN system – “Big Oil” blenders and the largest convenience store chains – might argue that independent refinery closures and conversions to renewable diesel manufacturing merely signal that the RFS program is working as intended. But original proponents of the RFS have insisted this was not their intention; the RFS was never intended to weaken America’s refining sector, put our nation’s energy security at risk, and eliminate tens of thousands of high-quality union jobs.

The Biden administration can and should pursue executive action to contain excessive RIN costs. There are several viable solutions; one of which is to create a government-backed RIN that EPA could always offer for sale at a price of 10 cents.  This fixed price government RIN would act to prevent RINs from selling for more than that price in the open market.  EPA already employs a similar cost containment mechanism in relation to a separate portion of the mandate that requires biogas to be mixed into the fuel supply. Since history shows there is no correlation between RIN prices and ethanol blending, the government-backed RIN would drastically reduce independent refiners’ costs and prices at the pump, while also generating revenue for the federal coffers that can be used for other purposes.

EPA can – and should – reset the RFS to expand the renewable fuels in our nation’s transportation fuel in a way that does not undermine America’s refining capacity and eliminate thousands of high-quality, family-sustaining jobs.

By setting achievable RVOs and containing the cost of volatile RINs, EPA can provide independent refiners with the certainty and predictability they need to plan for the future and invest in alternative fuels for the future, such as renewable diesel or sustainable aviation fuel.  If the Biden administration truly wants to “revitalize” the U.S. energy and manufacturing sectors, it should reset the RFS and give independent refiners the chance to be part of America’s future.